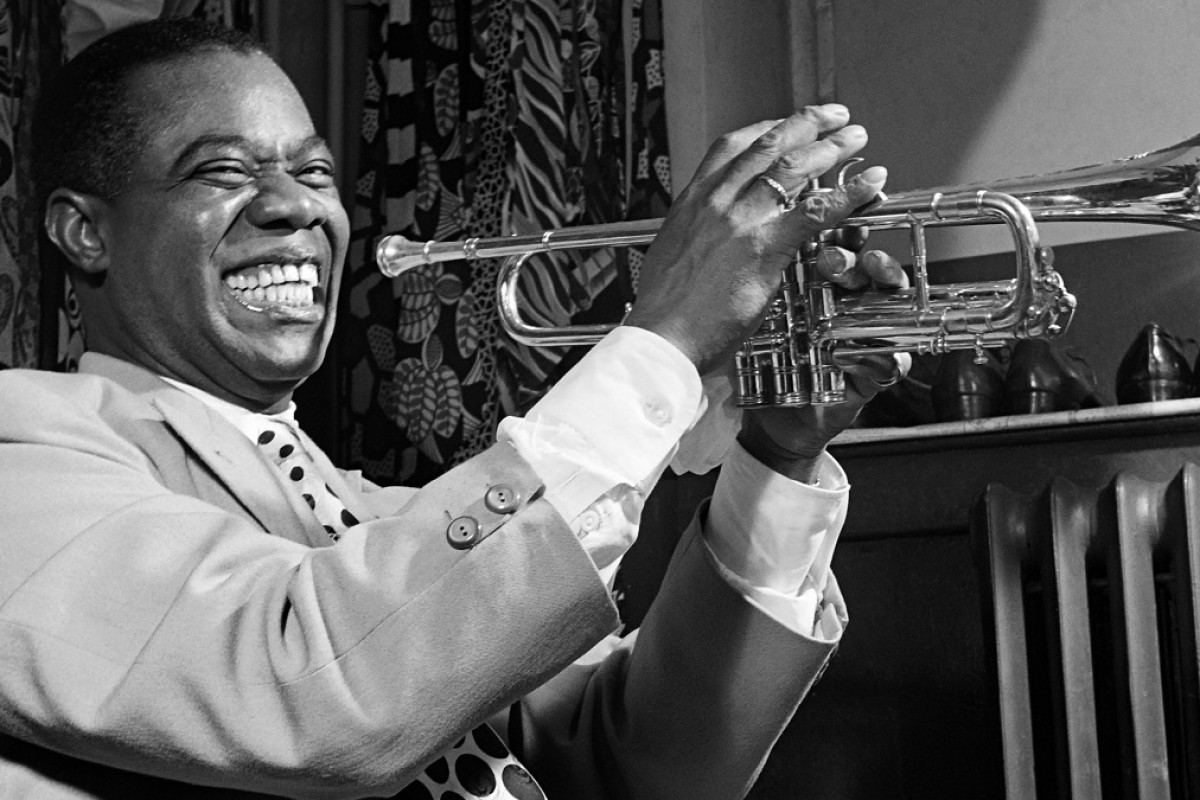 Louis Armstrong is born in New Orleans on August 4, 1901. A few days after his birth, William Armstrong, his father, leaves him and his mother Mary Albert. Due to his mother's young age, Armstrong is been taking care of his grandmother Josephine. Young Armstrong grows up in a very poor environment: he has no toys, little clothes and most of the time he is barefoot. His mother, despite their financial difficulties, manages to raise some money to send him to a school for black children in New Orleans.

Armstrong grows up in a dangerous neighborhood, where he becomes familiar with the world of night. He does various jobs, participates in gangs, listens to jazz music in dance halls for the first time. At the age of seven, Armstrong sings on the street with a group of friends and then, he gets the nickname "Satchelmouth" because of his big smile. He manages to raise some money and he buys a used cornet, a musical instrument made of brass that looks a lot like a trumpet. At the age of eleven, he was forced to drop out of school in order to work for his family. An incident on New Year's Eve 1912 changes the course of Armstrong's life.

During New Year's Eve 1912, Armstrong finds his stepfather's gun and starts shooting. Police arrives on time and Armstrong is transported to the New Orleans Home for Colored Waifs. This Home is only for black children who have broken the law and is administrated by Captain Jones. Jones doesn’t treat children as criminals, but as children who seek new opportunities and need support, discipline and guidance. Life in the House has a very positive effect on Armstrong’s character. In this house is where his love for music be born!

He shows great discipline, reads his lessons, while participating in household chores. After a while, he manages to join the choir, as a singer. Later, however, he starts playing various musical instruments, until he ends up with the cornet that he knew very well from the music he played with his friends on the streets. After 18 months in the House, Armstrong returns home with a used trumpet in his hand; it’s the first trumpet in his life.

Since then, Armstrong's life is changing: he starts playing music in ballrooms, meets local musicians, and musician King Oliver teaches him the cornet. Armstrong is now well known to all New Orleans musicians. Then, the band leader Fate Marable, impressed by Armstrong's natural talent and he offers him to play in his band, which at that time plays on boats making excursions on the Mississippi River. Armstrong leaves the band after three years and returns to New Orleans. Still, Armstrong is looking for his own unique music style …

In 1922, King Oliver invited him to Chicago to join the Creole Jazz band. He plays classical music alongside Oliver and wins everyone's admiration for his breathing ability. There, he meets the jazz pianist Lil Hardin who convinces him to follow her to New York. Together, they formed the band Louis Armstrong & His Hot Five and recorded their first albums. From 1925 to 1928, Armstrong recorded more than 60 records, which are now considered the most important contribution in jazz music history. The strong jazz rhythms and the particularly high notes of Armstrong's trumpet is his trademark. In the mid-1950s, he is having concerts all around Europe, Africa and Asia. Armstrong is gaining the reputation of being the best African-American jazz musician in the world. He gains the reputation of "the ambassador of jazz". The most exciting moments of his music career is when his album "Hello, Dolly!" goes to the top of the charts, when he has tour at East Berlin and Czechoslovakia in 1965 and when he records the wonderful ballad of "What a Wonderful World" in 1965.

In 1968, Armstrong faces a hear problem, which forced him to stop performing and change his lifestyle. The second heart attack, however, silences Armstrong's trumpet forever. Louis Armstrong dies on July 6, 1971 at his home in Queens, New York, at the age of 70. His funeral take place in Queens’ cemetery with the presence of many musicians such as Frank Sinatra, Harry James, Alan King, Bing Crosby.

Louis Armstrong has contributed significantly to the evolution of jazz music with new sounds and melodies. He fought for the rights of Afro-Americans by participating in the movement of that time, so that black people have the same and equal rights as all people. Armstrong believed and kept saying that

but you have got to find the other notes yourself.