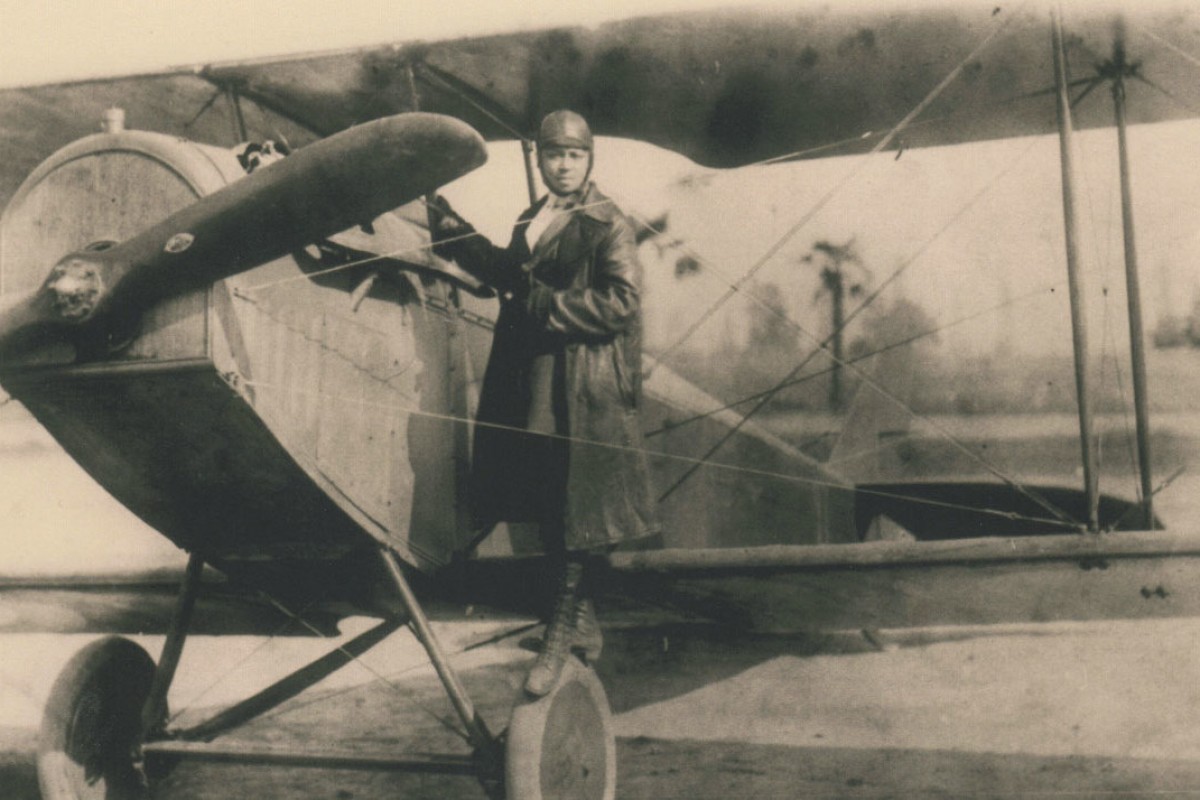 The first Afro-American pilot with a pilot's license

Bessie Coleman is born in Atlanta, Texas in 1892. She is the tenth child of the thirteen children of George and Susan Coleman. Her parents work at cotton fields and they have a poor and hard life. When her father moves to India because of his citizenship, Coleman stays in America with her mother and four of her siblings. Her family moves to a farm near Dallas, where Coleman begins to work in the fields.

Her mother, although illiterate, encourages her daughter to go to the local school - which is only for black children - to get an education. Coleman is an excellent student, loves math and studies hard. Although she quits school to work for her family, at the age of 18 she manages to go to a black university in Oklahoma. After a year, she is forced to drop out of school for a second time because she can’t afford to pay the university’s fees.

In 1916 she moves to Chicago and she begins to work as a manicurist and as a waitress, while meeting people of the high society. Incidentally she reads an article about the aviation - a new emerging activity – and Coleman is impressed! She reads more and more about the profession of pilot, while her interest becomes more intense when her brothers tell her stories about French women who fly planes in the First World War. While Coleman is dreaming of flying, she goes to aviation school to enroll. Her application is rejected, as the schools do not accept female students, mainly black women. Coleman, however, doesn’t give up!

With the encouragement and help of a local newspaper publisher, Robert Abbott, Coleman travels to Paris on November 20, 1920. She is been accepted to the French Aviation School and, after intensive French lessons, she is graduated on June 15, 1921. Coleman is the first African-American female pilot! She returns to America with great impatience for work, but quickly realizes that there is nothing for her. The only position opened is as an air show pilot, where she finds out that she knows nothing about it. That’s why, in February 1922, Coleman travels to Europe for the second time, where she is trained in air shows by the Dutch aircraft manufacturer Anthony Focker. She returns to America in 1922 full of confidence and optimism.

On September 3, 1922, Coleman takes part in the veterans' air show and impresses everyone with her aerial figures! Newspapers and magazines write about the woman who spins the plane so easily, while the Chicago Defender newspaper, published by Robert Abbott (who sponsored her studies) honors her. Coleman is now popular and feels that her dream has finally come true!

Coleman uses her popularity to fight against the racial discrimination of her generation. She refuses to take part in any event that doesn’t allow Afro-Americans to enter, while rejecting any air show that encourages racial discrimination. "Queen Bessie", as she is called, now dreams of opening her own aviation school where young children will have the opportunity to study what they dream of, without facing the difficulties she has encountered in her life. A tragic event, however, deprives her of this dream!

In April 1926, Coleman travels to Jacksonville, Florida to prepare for May Day celebrations, where she participates in air shows. She flies with the engineer and agent William Wills who is the pilot, and they examine the place to find the right place for Coleman to make the parachute jump that she would present the next day. Coleman has not fastened her belt so she can lean in and see better on the ground. In a maneuver of the plane, a technical problem in the gearbox blocks the controls, as a result of which Coleman finds herself in a vacuum and falls to the ground from a height of 610 meters. Wills cannot regain control of the plane, which crashes to the ground and gets in flames. 34-year-olg Queen Bessie and 24-year-okd Wills die on April 30, 1926.

More than 5,000 people watch the funeral procession in Jacksonville, most of whom are students who traveled there to watch her speech and admire her in the air. Three days later, Coleman's body returns to Chicago, where the funeral is being accompanied by more than 10,000 people, including colleagues, loved ones, fans and students.

Every year on April 30, Afro-American pilots - men and women - fly in formation over Lincoln Cemetery in southwest Chicago (Blue Island) to honor Queen Bessie, who proved that

The air is the only place free